This Week On #TecnoOwnTheStage: It’s The End Of The Road For Kechu 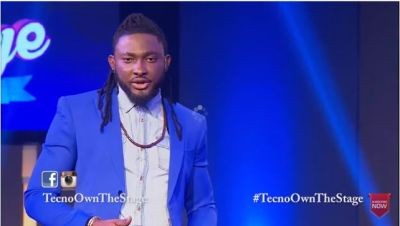 Tecno own the stage is back this week in all of its glory, the Karaoke show said goodbye to Banye last week, bringing the other contestants closer to the moneyyyyy!!!, which goes without saying the competition just got even tougher.Opening the show was Tanzanian’s Nandi who came on to perform Avil’s Hello Baby, she was able to impress the judges as Bien could be seen mouthing perfect to his co-judges whilst she performed. M.I also complimented her looks and most of all the way she carried herself and her energy.

Up next was the dreaded Yubu from Kenya, performing Wale Wale by Dr Jose Chameleone, Yemi Alade already looked like she was enjoying the performance before the contestant even sang two lines, she ended up giving him a standing ovation, the other judges also enjoyed it, Bien however noted that he needed to add swag to his performance.
Next came Sikin from Kenya who performed Wizkid’s smash hit number Ojuelegba, and even though the song was a Nigerian song, Sikin did ok save for a few miss pronunciations.The judges noted that it wasn’t the performance of the night they however applauded her efforts overall.The next performer Ramar254 from Kenya was quiet interesting, not just because he came on to perform M.I’s Africa Rapper Number One, but he nailed it, So much so that he got the judges and the audience on their feet. M. I was particularly impressed with his performance and control of the language.
The next performer Kechu who tried to pick up from where Ramar254 stopped , unfortunately the Tanzanian contestant missed her first lines which the judges noted was very vital.Overall they were not very impressed with her performance.Nigeria’s Gazby followed with a performance which sunk the bar even lower, the Ibadan contestant who came on to perform Flavour’s Nwa Baby unfortunately seemed to have missed the Don’t forget the lyrics memo. The judges noted that he did own the stage but not the song.
Last on stage was Pascal from Kenya who performed Thitma by Kansoul, and just like the other two before him, the judges just were not feeling it.The time of reckoning came, and there was bad news; M. I announced that instead of the usual one, three people would be evicted, this was announced to the obvious dismay of the contestants. Sikin, Gazby, Kechu and Pascal were put up for eviction.
Sikin was given another chance to continue in the competition, and just before sending the remaining three on their way the judges decided to give one more person a chance, the lucky person was Gazby.M. I then announced that it was officially the end of the road for Kenya’s Kechu, leaving an obviously relieved Pascal to make his way back to safety.
Tecno own the stage just gets more interesting every week, and next week might just be even more dramatic as it’s love and heart break week. Yaaaay!
If you missed this weeks edition no need to panic, visit Tecno own the stage’ Youtube Channel : Tecno OwntheStage and get all the hits and misses from last night.To be a part of all the fun and excitement, watch the show highlight and show some love to your favorite contestant.
Follow us on;
Facebook – Tecno Own The Stage
Twitter – @tecnoowndstage
Instagram – @tecnoownthestage
Tecno’s #OwnTheStage shows on:
Sundays – Africa Magic Showcase at 19:00 CAT
Sundays – Africa Magic Urban at 21:00 CAT
You can watch the repeat broadcast on:
Tuesdays – Maisha Magic East and Maisha Magic Bongo at 18:30 CAT
Wednesdays – Africa Magic Family at 19:00 CAT

“This Week On #TecnoOwnTheStage: It’s The End Of The Road For Kechu”, 5 out of 5 based on 1 ratings.