12 Punchlines From the 2021 Hennessy Artistry Cypher That Had Our Heads Spinning! 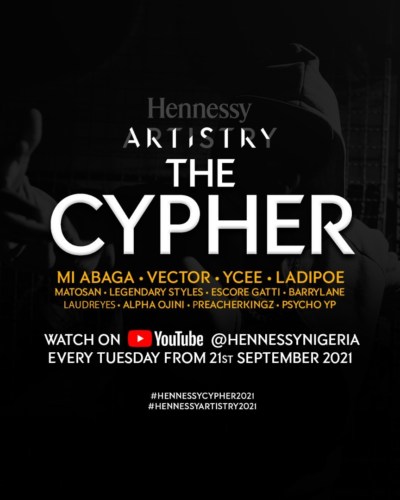 Hennessy released their 2021 Cyphers in 3 episodes of absolute Rap genius. Viewers were treated to an array of hard-hitting punchlines, from every artiste. There were simply too many to pick from, but here are the top 12 punchlines from this year’s Hennessy Cypher that had us off our seats!

Episode 1 saw Alpha Ojini, Psycho YP, BarryLane, and Legendary Styles go head-to-head, trading bars left, right, and center, resulting in an electic start to the Cypher. Alpha Ojini hit us with “Burna didn’t get this high by flying kites, but they need you to click so I guess it’s fine”; before Psycho YP hit back saying “So mans not ready, mans got plenty, man went headies, mans not headie; I don’t care about any, I just sip my Henny and it’s big YP!”.

Rap sensation BarryLane kicked off his freestyle with “How many hours you wait? How many dollars you made? How many people talk at your back when you bend down to tie your shoelace? The timing is never too late, be patient it’s still a new day”, Episode 1 was then wrapped up in style by Legendary Styles – “They say life is fair, but I don see enough bleaching cream to convince me now that my time is here, Legendary, styling them in a dodgy way like 6 & 9”.

Episode 2 had the season VII winner of the Hennessy Artistry VS Class, Matosan, alongside Escore Gatti, Preacher Kingz, as well as the first female winner of the Hennessy Artistry VS Class, Laud Reyes. Following the flying start from episode 1, these four kept the momentum going. Escore Gatti got episode 2 underway with “I devour, carnivore, bloodbath if I get involved, you should see my mask come off, NASA how I’m blasting off, I made it here not falling off, your verses got me nodding off”, until Preacher Kingz followed with “I’m still preaching, same reason they stoned Stephen; I saved the game now these rappers came for the thanksgiving”

Laud Reyes held her own as the sole female artiste on the Cypher when she said, “Hold on, wait, it’s corona coming; barbarian on the beat you’d think it’s conan coming”. Then it was down to the reigning king, Matosan to round off episode 2, and he brought the heat with “Too many bodies in my closet now I’m running out of space, like an astronaut, I’m talking to the moon”

The finale Episode saw some of the best Rap acts grab the mic to do what they do best. LadiPoe, M.I, Vector, and Ycee showed viewers exactly why they remain undefeated. LadiPoe started things off stylishly with “Henny Knows the problem with premium flows whether bars or XO, You people want it diluted”. M.I responded with “But back to my point my focus is shifting, my arms are tired of carrying the game that’s heavy lifting”

Vector kept it short and direct when he said “I don’t have to act a fool to get clout, every line is so thick you’d think I spit stout” and Bonus shouts out to Vector for the tribute to the late sound Sultan when he said ‘No King passed away when he passed, rest in peace Sound sultan, elevate with the greats’ . Finally, Ycee had the honor of drawing the 2021 Hennessy Cypher to a close – “Man I’m going all in like this was a gamble, get with the program or you change the channel; I can throw a stack heavier than shatta bandle”

There you have it! The top 12 punchlines from the 2021 Hennessy Cypher, and we just hope we get the same level of heat in next year’s edition.