Previous: Tinashe Reported To Have Been Kicked Out Of RCA Records 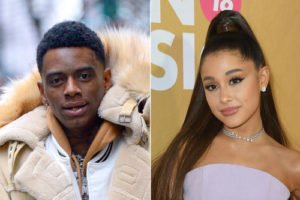 Just when you thought things couldn’t get any more interesting in the most recent wave of headline-inducing Soulja Boy news.

After declaring himself to be the year’s comeback king and asserting his influence over the likes of Drake, Soulja Boy had some time to catch wind of the recent comparisons being made between his “Pretty Boy Swag” anthem and Ariana Grande’s most recent “7 Rings” single.

First, he took to Instagram to upload a clip in which news anchor points out the similarities during a segment, adding the comical caption, “Arianaaaa?????? Ariana?!,” a nod toward his viral “Draaaake” outcry.

But, naturally, Soulja couldn’t stop there. Where Ariana took to Twitter to celebrate the group of songwriters and frequent collaborators who helped put “7 Rings” together, including singer-songwriters Victoria Monet and Tayla Parx, Soulja Boy chipped in by demanding that Grande gives him his “credit,” adding a pointed “period” to match.

In another tweet where Ariana Grande seemingly responded to previous fan criticism of the similarities between the songs, Soulja Boy further wrote, “Stop stealing my swag.” And in adding more, Soulja even commented on Ariana’s tribute “miss u” tweet to Mac Miller and wrote, “You’re a thief.”

Give me my credit. Period https://t.co/Akhp2BXcuY