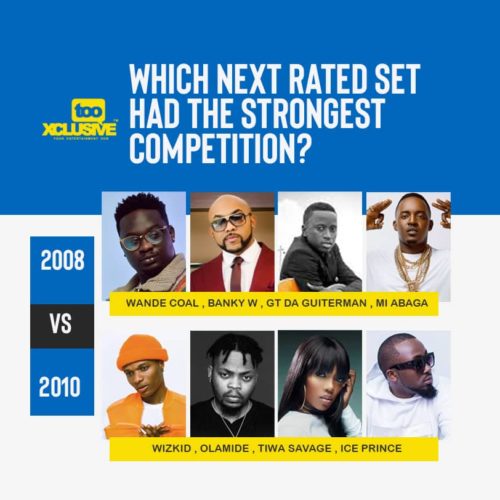 In 2008, the next rated categories of artistes were undoubtedly some of the biggest artistes in Africa and still are. They are one of the greatest set of artistes the Nigerian music industry has ever produced. Wande Coal, MI Abaga, Banky W & GT Da Guitarman all light up the industry with great music and musical contents. Though their best times are past them, but they still a force to reckon with in the music affairs of Africa.

In 2010, the set of up and coming Nigerian artistes in the industry were really huge potential. These guys were hot, and they made it clear through their music to Nigerian music followers and the world that they were going to make a difference. These set of artistes were in the Next Rated categories of major music awards in that year and up till this moment, they are doing their music in the biggest ways as they have grown to be some of the biggest music acts in Africa. They are; Wizkid, Tiwa savage, Olamide and Ice Prince.

Nifemi is a graduate of the University of Lagos. He's a unique user of the pen when it comes to the expression of whatever. He is editor-in-chief of the organization and also a writer of news, articles, editorials and a lot more to help expand the level of knowledge of the readers and simultaneously have them entertained. A lover of music and football is who he is and a Man Utd die-hard.
Submit your comment
4 total pingbacks on this post
VIDEO OF THE WEEK