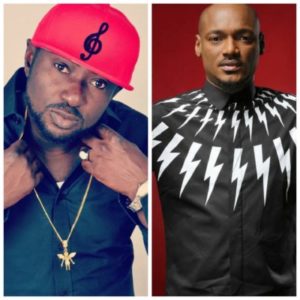 The war between two of the members of the defunct Plantashun Boiz has taken a new turn as 2Baba, one of the warring singers, filed a N50 Million lawsuit against Blackface.

Recall that Blackface accused his former band mate, 2Baba, of stealing his compositions. He claimed to have written African Queen and Let Somebody Love You which 2Baba performed. The controversial singer repeatedly called out 2Baba in public, as a dubious and selfish artist. These accusations have been going on for long years with 2baba taking an hesitant approach to the issue.

The iconic singer has now reacted, turning the table on Blackface. 2Baba and his manager, Efe Omoregbe, filed a N50 million lawsuit against Blackface, claiming he never wrote the aforementioned songs.