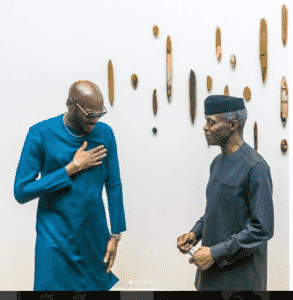 Vice President, Yemi Osinbajo, on Tuesday, paid a visit to Hollywood during his working visit to the United States; and in his company was 2Baba, Mo Abudu and other prominent figures in the Nigerian creative industry.

Osinbajo said the visit was an “interactive investment forum with institutions and individuals in Hollywood.” He added that “creativity and talent abound in Nigeria and we are open for business. I met with reps from Universal studios, Warner Bros, 20th Century Fox, IMAX, Disney and a host of others.”

Toyin Adeniji during the investment forum, said “BOI has committed $20m to more than 40 projects in the Nigerian film industry—in infrastructure, distribution, content development etc. The Bank is ready to do, even more, having recently raised about $1bn.”

Dr Dipeolu said “We want to promote cooperation between Nigerian & international players, and attract investment to Nigeria. We will be discussing infrastructure, intellectual property protection, etc.”