5 Nigerian Music Collaborations That Should Never Have Happened! 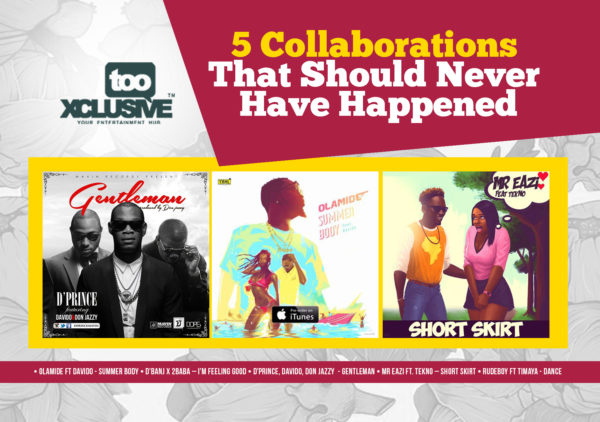 So much importance is attached to music collaborations in this part of the world, especially when it involves artists whose impressive individual records have inspired thoughts of shared synergy that could produce brilliant collaborations.

Looking back, we have been blessed with some great collaborations between Nigerian artistes with different music styling and gifts, but there has also been quite a number of epic fails that ended up as ‘dirt’ under the carpet or remembered in discussions about collaborations that should, well, not have been happened.

Having an Olamide and a Davido on any song should be enough hype needed to treat the unheard material with high rating. You’d expect two of the biggest Nigerian artistes of different but workable music styles to concentrate their best music elements into a combined effort (like it was done on ‘The Money’) but this combination failed to form a masterpiece on ‘Summer Body’. Rather, the mild buzz the song got beyond the big name factor it enjoys, was because of the shady lyrical injection by Davido. Other than that, ‘Summer Body.’

For what is a collaboration between the two would-be music icons and pioneers of African music to the world movement, one would have thought the song would continue to be talked-about even seven years after its release but the reality shows otherwise; seven years after ‘I’m Feeling Good’ hit the Internet, it is hardly ever remembered. I was even recently asked by a friend if D’Banj and 2Baba ever collaborated.

Imagine a lineup of Davido, Don Jazzy bringing all of their mighty music influence and goodwill to a D’Prince song and it still didn’t pop. The 2014 single is another ‘expensive’ collaboration which failed to make a mark.

As far as the Nigerian music industry is concerned, Tekno and Mr. Eazi are two of the biggest breakout stars of recent years and the two singers have risen to an immense level of prominence, so their collaboration was met with intense anticipation, only to be served cold rather than hot like hit single are served. The controversy surrounding the visual to the song did not help matters.

Oh this happened? It would take serious memory juggling to find scraps of thoughts about ‘Dance’, a collaboration between two singing heavyweights of different specialties, two artistes whose talents had been previously married to produce a brilliant record, but on this record it fell flat.