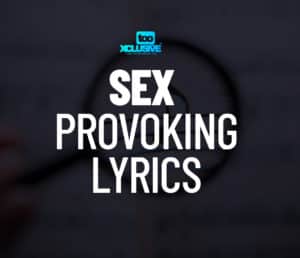 In the world of music, so much is disguised in the lines that form verses. Rappers like Vector make lustful thoughts seem like hello while M.I raps about his dirtiest intention and makes it sound like a compliment. Using metaphors and innuendos, lyricists are able to make lewd expressions and still get the nod of even the most meticulous moralist. I’m not a moralist but I’m meticulous when it comes to music and so I was able to pick out 5 interesting sexual innuendos used by Nigerian artistes.

With this line V.E.C makes it seem like he’s talking about downloading a zip file and unzipping it, while he’s actually suggesting to his female subject to unzip his trouser to see the size of meat in his d-section. VEC is such a crafty lyricist.

“Tickle the clit, I put my Eastwood in her West end / Her North side headed for my South pole”

With all the ‘North – South – East – West’ mentions, you might be tempted to think M.I is giving direction to some significant place while what he did was describe the direction of his body and that of his partner during a session of sex. If you don’t believe me, check up the meaning of ‘clit’ and imagine the kind of play that involves clit tickling.

“Don’t be mad at your girl’s reputation / cause I don’t make her legs get along separation.”

Most people know M.I for his great beef and braggadocio verses; but the rap icon is also a master at sexual innuendos. He is actually a very seasoned lyricist who can deliver brilliant lines on any topic. His referenced line on Star is clearly about him spreading the legs of a lady and going in. Mr Incredible *eyes rolling*

“She tell me say she dey swallow / I told her it’s good for the body protein.”

Oh Mr. “This is Nigeria”, so you sef dey drop lustful bars? Falz’s quoted line from Clap isn’t another instructive line from the whazupguy. It is basically an encouragement to the ladies who give ‘head’ that it helps their diet.

“She say she’s a fan, she want to blow me / whether na standing or ceiling sha ti fe mi”

Of the many pop stars around, Mayorkun is perhaps the smoothest with words. His word play game is so strong and his use of metaphor in the aforementioned line is testament to that fact. While it’s common knowledge that a working fan, whether standing or ceiling, blows air; we all know that when it involves he/she it’s a different kind of blowing you’re talking about.