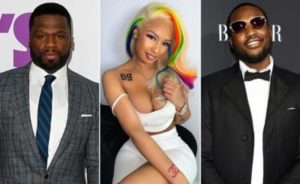 Tekashi 6ix9ine will be simmering in prison until fall 2019 and his girl Jade inked her collarbone in his honor.

She got a matching “69” tattoo in what appears to be a display of loyalty for the rapper. Some people are questioning her decision considering the seemingly short timeframe within which such commitment was developed.

50 Cent and Meek Mill are among those who have expressed their skepticism over her show of loyalty.

50 Cent reposted one of the photos of the freshly-tatted woman, attaching his opinion in his caption: “She was only with Danny for 5 days before the F.E.D.S came. Is it LOVE or the clout? run charity walk. LOL?”

Meek Mill also chimed in by commenting on the original post: “Oh you clout chasing chasing? Y’all girls be crazy.”

Jade responded to Meek, asserting her genuine affection for Tekashi: ” This ain’t no clout Chase this certified!”

Tekashi 6ix9ine had been showing off his new boo on social media last month. While their relationship may have started long before the “STOOPID” rapper introduced Jade’s booty to the interweb, the matching tattoo still comes off as an extravagant gesture.

Then again, a woman who is a complete stranger to 6ix9ine appeared to pull a similar stunt back in August. The mark of the Dummy Boy might become a trend after all.