ADA AMEH: “If You’re Really Touched, You Won’t Have Your P.A Film You” – Etinosa Drags Warri Pikin To Filth

It will be recalled that Real Warri Pikin shared a video of herself while paying a condolence visit following Ada’s death.

There was also another clip of her hugging Empress Njamah, Ada Ameh best friend, while she broke down in tears.

@empressnjamah your kind is Rare
May You Live Long On Earth!
RIP @adaameh ?

Reacting to this, Etinosa took to Instagram to share her views and drag Real Warri Pikin. According to her, if she was really touched during the visit, she would not have her personal assistant film her.

She added that Warri was only chasing clout and that she would have destroyed that camera should she have been present.

I feel we can all drop our phones and cameras and really do the condolence visit we came for. Imagine me seeing someone recording himself or herself coming to my father’s house for condolence.

I would have destroyed that camera. Let’s all be emotionally sensitive, emotionally involved, and emotionally genuine. Not everything is CONTENT. Well. I guess. We all grieve differently.

If you are really touched, If it is not just a publicity sighting for you, you will not have mind to tell your P.A hold the camera. As I’m walking in the recording. Record everybody.

As she’s crying record her. Then you sat down, edited, even put soundtrack. No. It’s offensive. Clout is good for business but this one is not nice. 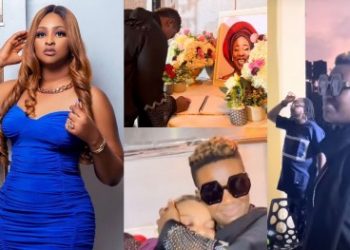 “I Don’t Respect The Dead, Ada Ameh Was A Bully” – Kemi Olunloyo Scoffs

“It Is A Never Ending Nightmare For Me” – Ada Ameh’s Partner, George Deegha Devastated