African Entertainment Should Not Be Ignored: Open Letter To BET 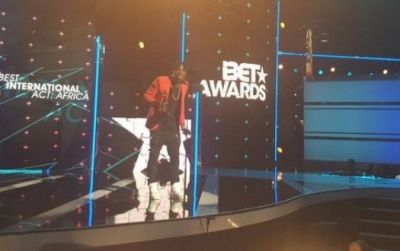 Dear BET, I hope by the time this letter is published, you would have offered an explanation as to why their award for best International Act, Africa is given to whoever wins backstage or hours before the show starts instead of on stage during the main award show. Indeed, an ‘explanation’ has come. BET maintained in a post on Instagram that they presented the best International Act, Africa award to Ghanaian artiste Stonebwoyb on the main stage.

This is simply not enough!

The BET (black entertainment television) awards are considered by many to be one of the only mediums for artists of African descent to get the deserved recognition for their artistry. Why then do they choose to blatantly disrespect African artists by handing them their awards at pre shows, backstage or even hours before the main event?

The prevailing opinion amongst fans of the network is that ‘they simply do not give a damn about African entertainment or their stars.”. In my own personal opinion, that is simply not true. The fact that BET even included a best international act Africa award shows how important African entertainment is to them. Also, since their introduction into the African market, they have constantly used their platform to promote African artists abroad. Kudos to them for this. But still, it’s not enough reason to treat our artistes as second class citizens. Treat our artists the same way their colleagues are treated abroad. If not for anything, consider the fact that African entertainment has come of age. I mean our artists are starting to compete with their international colleagues in terms of output. By this I mean, the quality of work our guys now put out is constantly improving something that BET has always commended. Now the only difference between a Wizkid and Chris Brown video is the artists themselves.

If BET feels presenting the award on stage would mess up their programming schedule, they could go the MTV route. MTV also has a Best African Act award category in its annual MTV Europe Music Awards and it presents the awards to the winners right on the main stage. Nigeria’s Dbanj, 2face and S.A’s Freshlyground are example of acts that have won the award. The award category was retired in favour of the MTV Africa Music Awards (MAMAs) starting in 2008. But it made a comeback in 2012 with Kenya’s Sauti Sol winning the award in 2014.

MTV also took their appreciation of African entertainment further by creating the MTV Africa Music Awards (MAMAs). Even though MTV has their own issues with regards to our artistes, at least their MAMA awards platform is helping in getting more recognition for African music abroad.

I’m also glad our artistes have not kept quiet about it. Fuse ODG sent out a tweet saying “Dear @BET, the reason why I didn’t come is because you give our awards backstage! You have no respect for our hard work and achievements.” Yemi Alade followed suit. “By the way, @bet_intl Africa is not a country.!!! ..it is wrong to nominate huge African stars and publicly try to humiliate Africa. Why on earth is the African category of the awards held hours before the “main event? if African artists are not worthy in your sight.”

Yemi Alade went further calling for the cancellation, deletion and omission of the category, if the winners will not get a chance to receive their honours at the main event.

“Pls by all means cancel, delete, ommit the “best international act (Africa) category out of this glorified award. This is wrong!! Wrong wrong wrong wrong.” Wizkid rounded it all up. “Lol So I’m hearing BET is mad cos I didn’t come for the pre shows and interviews! Lol. I love u all for what u do for black entertainment worldwide.I respect the fact u guys do this every year.i know it’s not easy.I understand. But I won’t be attending ur preshows and nominee parties if I’m getting the award at 10am before the main show.” He said.

Since BET introduced the best international act Africa category in 2011, a total of 5 Nigerians and 2 Ghanaians have won the award.

I just hope BET makes amends for their actions concerning this matter. African entertainment is to important to be ignored.

This article was written by ‘Bisola Alawode. ‘Bisola is a journalist and PR consultant. He can be reached via his email address [email protected]