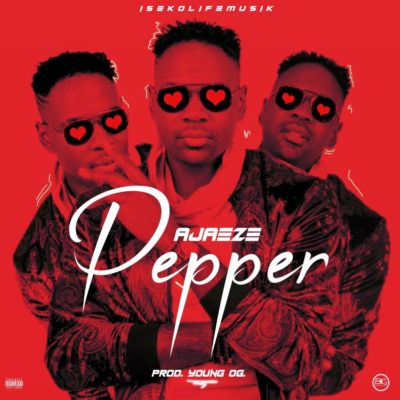 There seems to be no stopping for Ajaeze. The International Afro Pop Star who people refer to as  “the masked man”@ajaezeo springs a heartwarming surprise on his fans with an early Christmas gift.

What else would it be if not to bless the fans with a single for the Yuletide.  Fresh off the chart-busting ‘Whatagwan’ single that is blazing Radio all over West Africa, the Young OG produced ‘Pepper’ is a smash hit follow up for all the lovers in the building from the stable of the multi-talented Ajaeze and believe it when we say you would be looking for your own Obianuju to fall in love with over and over again.

Is this the last from Ajaeze this year? Not at all. Ajaeze has linked up with ace Video Producer Patrick Elis to shoot an impressive visual to the trending single ‘Whatagwan’.

The video was Written and Directed by Ajaeze himself and you won’t want to miss it when it comes out. For now, Listen and enjoy ‘Pepper’ and anticipate ‘Whatagwan’ video hitting your screens soon.