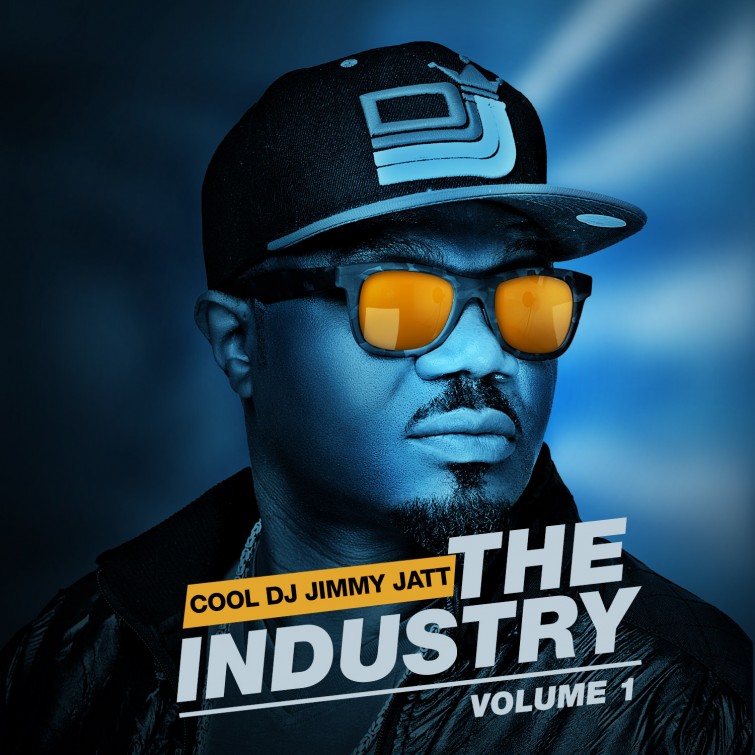 22 tracks, 4 bonuses, a roll call of industry’s legends and superstars, 1 album and Cool DJ Jimmy Jatt; The Industry Volume 1 is a compendium of his 25 years of experience as an astute pedagogue of the creative art – music. With like 20 or so producers working on the project and a featured list of over 50 of Africa’s best acts which sadly didn’t include frontliners Wizkid, Davido, Sarkodie and Tiwa Savage, it is unarguably the biggest and most expected toil from Africa.

Sequel to The Industry Volume 1 official launch, it displaced the biggest solo album ever to come out from the shores of Nigeria, 2face Idibia’s The Ascension off iTunes and took it’s number 1 spot; a feat that majorly explains how well-anticipated and received, the album was upon release. On the album, you notice that the features were arranged such that industry allies can go together and it explored basically the rap and afro pop genre only but with a variety of sounds tied to it. While Jimmy Jatt tried not to force feed his obvious love for rap music down our listening throats, you find that the album gained it’s momentum when applied with torque from the rap genre.

Below, is a track-by-track breakdown presented in a comprehensive all-in-one review.

Intro (feat. Olisa Adibua, Modenine, Toolz & Do2Dtun) – Seasoned OAP, Olisa Adibua opens The Industry Vol. 1 referring to it as the future’s classic and proclaiming Cool DJ Jimmy Jatt, a legend. Modenine takes over shaking things up and later closing it with the lines… “don’t ever ask me where I’ve been, all you have to do is google me.” Toolz is not far from the truth when she calls it Africa’s biggest collaborative album.

Greatest (feat. Modenine, M.anifest, Navio & Femi Kuti) – With a 90’s disco/R&B theme with instrumental pipes from afro beats maestro, Femi Kuti. The fusion of Angolan, Ghanaian rappers andNigeria’s Modenine set the limbo bars for The Industry Vol. 1 on quite a high. At number two and the compilation’s opening track, it leaves too much to be expected.

Mo Bottles (feat. Spellz, Traffik & Dammy Krane) – These guys stepped down the hype that the legends on the previous track had garnered in anticipation of the album’s wow moments. The Industry Vol. 1 would still be a classic without this.

E to beh (feat. Banky W & Phyno) – Believe me when I say you never hesperrerit. Yes, we’ve caught on that Banky W shows prospect in the rap genre but on E to Beh, he dropped it hot… real hot! And trust Phyno to always represent. Good stuff!

Moneys (feat. Eva, Aina More & Zaina) – The divas roll dices on Moneys showing they can be as suave as them guys. With Eva dropping lines in her signature style, Aina trying to be an Iggy and Zaina doing her contralto thing, it’s a decent effort that should well… be applauded.

Onile (feat. Eedris Abdulkareem & V-Tek) – Eedris stole some opportunity to shine on Onile reminding us how much we’ve missed his well exuded presence in the industry. Guy’s still got it good. V-Tek equally lives up to expectation when placed alongside bars spitting wizard, Eedris.

Eeba (feat. Reminisce, Sossick & Sarz) – I’d lost count of the ‘eebas’ hollered at the beginning. It gets so annoying to that point where you just want to skip the track. And Sarz’ rap wasn’t any bit convincing at all. No!

I Am Legend (feat. Ruggedman, Eedris Abdulkareem, M.I & Waje) – This right here, is the stuff legends are made of. The features on this track smoked it to the last fume. They left no stick unburned. Waje’s soprano though, it can jerk a passed out soul back to life.

Live It Up (feat. Seyi Shay, Zamir & General Pype) – This feature is actually exciting. The hierarchical blend of the artistes tells the basic of what to expect on a song like this. Sampled on an old skool R&B beat, Seyi’s vocals are sweet such that you can literally lick ’em off. Zamir’s bars spitting game is hot and the laid back manner he served it makes you wanna attach a boss label to his fedora. General Pype is just a badt guy!

Gifted – (feat. D’Banj) – 2Kriss cooked a flavour inducing cut for koko master D’Banj to lay bare his fallen nothingness. His vocals were stifling in and out or maybe it was just bad production. Not sure who this blame belongs to.

Lori Standing (feat. D’Prince, Olamide & Reekado Banks) – Don Jazzy brought his Mavins eminado on Lori Standing. Reeky Banks is one fast rising act to look out for, dude knows his music like doing the hook to Lisa Stanfield’s Been Around The World on the track’s close. Olamide’s cut is impressive and not like the vocal features he’s settled for of late.

Faridah – (feat. Skales, Kamar & Morell) – Simply put, this is one very beautiful, urbane style traditional music. Them guys did good on this one.

Marry Me (feat. Kcee & Harrysong) – Groovy tune with melodies that will get you to show the ‘bar’ at that Owambe. It’s a couples’ classic with potentials of becoming evergreen. Regardless, if this song were any longer than 3 minutes, it’d have become a bore. It was a wise choice to keep it short thereby making it wanted more.

How We Roll (feat. Terry G) – As the title suggests, Terry G lips on and about his Africa wide escapades as Naija’s number one ginja man. You can’t miss the sweet grooves he wired into this beat.

Body (feat. BOJ & L.A.X) – Acts like BOJ give hope for the future of our industry. With sounds not relative to typical everyday music, he teams up with Starboy’s L.A.X to deliver a special feel good tune. You almost forget it’s a typical female appreciation song.

Bugatti (feat. Sean Tizzle) – Yes, I agree too. Sean Tizzle has a fine tenor range (with auto-tune enhancers here and there)… and that’s it! Nothing more.

Dan Ya Mo (feat. Lil Kesh, Viktoh & Olamide) – YBNL Nation crew stole every opportunity to show themselves on Dan Ya Mo and boy, did they show themselves… *Shoki mode activated*

Glasses Up (feat. Yung GreyC, 2face, Sound Sultan & Burna Boy) – Call this the feel good anthem of legends. Yes! And this track didn’t disappoint. 2face and Burna Boy probably deserve more accolades than they might get for this party starting number. The fine tune puts you in celebratory mood. Cheers to 25 freaking years Jimmy!

Thank You (feat. Niyola & Nikki Laoye) – Having come this far and achieved this much, it’ll only be proper to show gratitude to The One who made it possible. While Niyola slacked on the appreciation number (I’m actually wondering why), Nikki did everything she could to make it up but it wasn’t just enough to cover for the blandness. In the end, the intended effort would be defeated.

Emujo (feat. Iyanya & 4×4) – You’ll love the afro beat feel but at this point, even you can agree that we’ve had an even fairer dose of African collabo on track 2. Skip!

Cool As Ice (feat. Ice Prince & Iceberg Slim) – Sampling this track, all I could think of was the impressive delivery. Iceberg Slim really is one underrated rap star. Nigga is so damn good, he be sending chills down on hiss verse. Ice Prince… well, he’s a very good badt guy.

Spin (Remix feat. Vector, Tenim & Kay Switch) – This is perhaps one of the best collabos on The Industry Vol. 1 and the features rocked this hit. V.E.C served his lines on a platter, Tenim’s melodies had a special appeal and Kay Switch’s sass attitude was the cherry topping on this cake’s icing. Justice would have been done even if Jimmy chose to leave this remix as the only bonus.

The Industry Volume 1 is not exactly the flawless album that we (did not) expect it to be, regardless, for a project that celebrates 25 professional years in an industry like ours, Cool DJ Jimmy Jatt played dare with the truth and then did the seemingly impossible (even though not technically). You can easily make a pick of 12 – 14 songs that would perfectly suit the label of “Africa’s biggest collaborative effort”. Still, much as the content in the body of work could easily pass off for future material spread in record time, the turn up (features) tells much about the accord and respect he’s been able to command in the industry. History will never go down without a mention of his name. DJ Jimmy Jatt was, and still is… HERE!

I have magic in my hands and I'm excited to be sharin' it with the world.
Website
Submit your comment
1 comment on this postSubmit yours
Recent Comments
Popular Posts