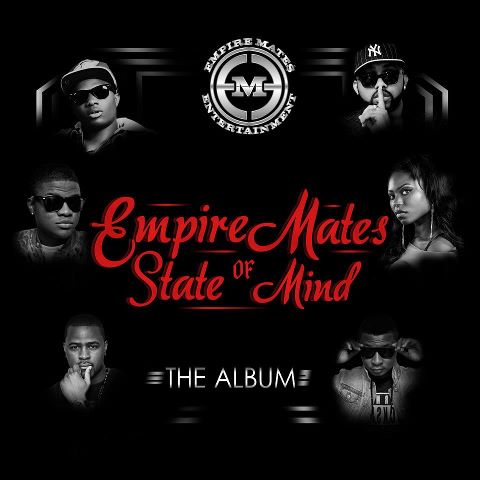 ‘Empire Mates State of Mind’! That title teases memory of the Jay-Z and Alicia Keys earth-shaking collaboration maybe that was the major reason the E.M.E album was highly anticipated or because Banky W recruited sexy soul singer ‘Niyola’ and smooth J.Holiday-esque singer ‘Shadyee’ to join titan ‘Wizkid’ and struggling ‘Skales’ in his musical empire. Regardless, the team of 6 including resident disc jockey ‘DJ Xclusive’ has unleashed a lenghty LP that will induce listeners in different states of mind. The curtain rises to a ‘legendury’ performance by the leading trio on ‘Baddest Boy’, followed by ‘Get Down Tonight’ with Banky W, Wizkid & Skales again as they try to make listeners prioritize partying on the scale of preference. ‘Shadyee’ debuts on ‘Sun Mo Mi’ and shows off his vocal pipes alongside Banky W and the ‘Mukulu’ crooner, they glide on an instrumentation crafted by ‘Masterkraft’. Comedian ‘Basket Mouth’ appears on the almost hilarious ‘Hate’ skit, which is in three parts to ease the tension.

Undoubtedly you will find yourself rolling to the potential club anthem ‘Roll It’; Banky W and the superstar rise to the occasion on this number complimented by the ace production the duo do not only hit the bull’s eye, they destroy the target board. E.M.E warns us not to find the outfit’s trouble, well if you do not want to trouble your ears, skipping ‘Find Your Trouble’ maybe advised and playing the Shizzi produced ‘Body’ is encouraged. Wizkid gives a racy yet engaging solo performance on the up-tempo number, ‘Body’ which will find a resting place on any dance-floor. ‘Ko Mo Le’ and ‘Dance’ leaves a scorn on your face untill ‘Niyola’ raises the temperature up armed with her sultry vocals on ‘Don’t Delay Me’. The songbird soars showing her talent and experience as a vocalist over the years, leaving a smile on your face. Wizkid looses steam as he loves a ‘London Girl’, while the Basket Mouth’s ‘Hate’ thickens.

Another winner is the Sarz produced ‘Dance For Me’ headlined by solely Wizkid, the international pop act asks for a dance routine, a request a toddler will fufill due to the infectious and groovy nature of the track. Babies will hopefully be made with ‘Follow Go House’, Mr. W returns to his ‘Mr. Capable’ days this time with Shaydee and Skales on the mid-tempo number. ‘Follow Go House’ shows the side of Banky his fans misses dearly, the trio delivers. Skales talks about his baby on the Sarz produced grower ‘My Baby’; he incorporates Hausa as he makes intentions known. U.K R&B vocalist ‘Rotimi’ makes a guest appearance on the ‘Only You’; R&B lovers should check out for this one. The ‘Baddest Boys’ fail to represent on ‘Reppin’ EMEAZzyy’ nonetheless Niyola and “S to the K” flirts on ‘Wetin I Want’.

‘Change’ is another defining moment and my favourite track in the tiring album; obviously inspired by the #OccupyNigeria movement and the current situation of Nigeria, the all-star cast led by Banky W, co-piloted by soothing harmonies by Niyola accompanied by Wizkid who delivered a somewhat polished vocal and company proves that they got the X-factor. ‘See Me My Mama’ aims for weddings, Basket Mouth makes a final appearance on ‘Hate 3’, and the DJ Khaled reminiscent ‘Can’t Stop Us’ are final minutes in the LP as the curtain falls.

Monotonous, tired club-beats, under-usage of Niyola, too lengthy, are some of the adjectives or phrases that can be used to describe ‘Empire Mates State of Mind’. A mind-blowing 15 tracks could have been extracted from the lengthy and exhausting 22 tracks, packaged and released instead. After all is said and done; the empire seeks to wage war and conquer the dancefloor and they shocking accomplish that sadly the few producers on the project are to blame for the monotonous nature of the LP. Wizkid, Niyola and Wellington stood out from the pack; that said the album is pretty solid.

“Follow the reviewer of ‘Empire Mates States of Mind’ via @Ogagus_”