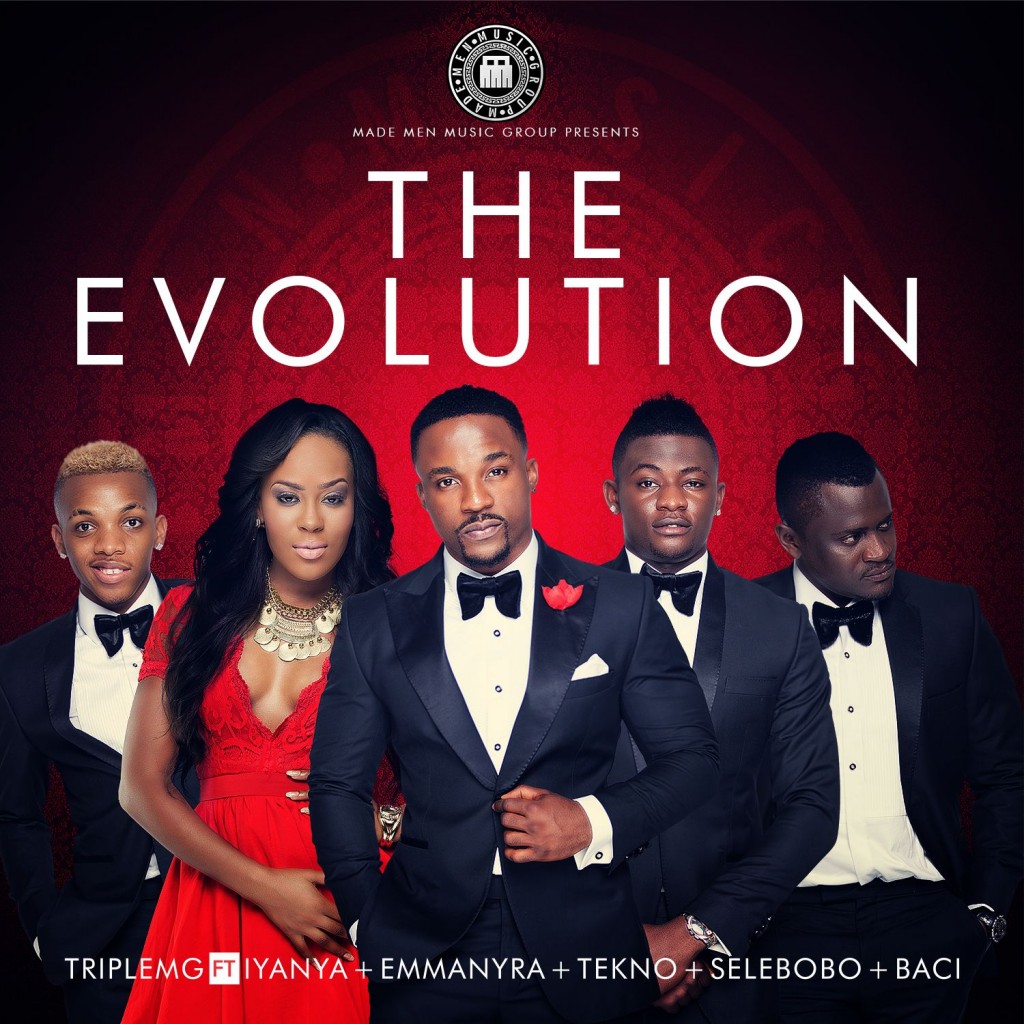 After much hype and buzz, one of the most talked about recording and managing companies in Nigeria in recent times, Made Men Music Group (Triple MG) co-owned by Iyanya and Ubi Franklin has dropped its first collabration album featuring all artistes signed under the label; Iyanya, Emma Nyra, Selebobo, Tekno and Baci.

The 14 track album titled, “The Evolution” is preceded by singles, “Say Yeah” & “Angelina”  lifted from it, seems to be the beginning of something good for the group. Selebobo who produced most of the tracks on the album did a good job mixing and mastering. The album contains mostly commercial songs with recycled beats and lyrics. It seems like the album was mainly to promote the groups upcoming acts. While the album has its flaws, it is a commendable attempt.

Go through a track-by-track review of, “The Evolution” and tell us what you think

Say Yeah – The album kicks off with collaboration by the Tripple MG gang which sounds very much like the group’s anthem. I particularly like Emma Nyra’s part in the song.  The beat was good although it sounded like something was missing and the Igbo rap was not bad at all. Way to open an album. I admit it aroused my curiosity because it’s not your usual noisy club song although I didn’t care much for the intro.

Poco A Poco – The second track on the album has an upbeat tempo. It makes one want to really dance. This track could a club banger. The Poco A Poco hook is quite catchy.

Amigo – Emma Nyra’s Amigo is definitely a favourite. The afro-pop track which addresses her “fine bobo” makes one want to dance the traditional way. The steady beat, her voice and the way she plays with words is absolutely supersonic.

Mr. Orio – starting off with beat like that of Banky W’s Loving you, the song sounds absolutely familiar. Perhaps it’s Iyanya’s combination of tunes from different popular songs or the beat that makes it so. However, generally the song was not catchy enough.

Alleluyah – Tekno’s Alleluyah sounds suspiciously like a cover of Shaba Ranks’ “watabumbum”. It’s a nice reggae attempt albeit it lacks content. Produced by Tekno himself, the beat and the “ahoo” sound are what make the song interesting.

Angelina – While the song has a catchy tune as well as nice enough instrumentals, there is so much repetition because we keep hearing the same lyrics. One can say it lacks content although Baci and Iyanya’s voice makes one want to overlook that….almost.

Asampete – this track is totally different from others in the album. It’s a love song with a highlife feel. The beat is slow but enjoyable. While one might not understand Igbo, you can’t get tired of listening to the track. It’s very enjoyable.

Dreaming – The track produced by DJ Coublon comes with beats sounds very much like O’Marion’s ice box. Iyanya and Emma Nyra’s voice blended well together but Emma’s voice was a tad too loud/sharp.

Selfie – This song is definitely for the “selfie” taking people. The Selebobo produced track sang by him has a very catchy tune. While it is witty, it failed to hold my attention for long. The track reminds me of the Mavin’s Dorobucci. If properly directed, a video of this song won’t be bad at all.

Showcase – the song obviously appreciates a woman’s physical attributes. There’s not much to say about this track. The beat sounds vaguely familiar and the lyrics don’t make much sense. It sounds like a weaker version of Timaya’s Ukwu. Tekno failed to impress on this one.

Aphrodisiac – this afro beat song is really enjoyable. Baci’s voice came out well and Emma’s underground input was a nice touch. It’s along the same lines as Asampete just not as good.

Follow you – Baci’s voice is arguably one of the strongest in the group. The song though nice, has no special features. It’s just your regular love song with a very nice beat thanks to Selebobo’s input.

Zamina – Shakira would definitely dance to this song. Not quite sure what “Zamina” is supposed to be, but it makes one want to dance. The tempo is not too fast and though the beat could have been better, it is good enough.

Osho – Rounding up the album, the drum beat and guitar in this Iyanya/Tekno collabo made the song.