My Album Will Be The Biggest In Nigeria – Skales 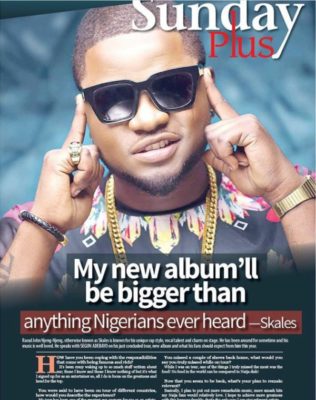 Singer Skales, needs little or no introduction in and out of the music scene.

The ‘Temper‘ crooner, recently sat down for an interview with the Nigerian Tribune Newspaper, where he opened up on so many things to include his new album, relationship with Wizkid and international collaborations.

Read excerpts from the interview below:

Now that you seem to be back, what’s your plan to remain relevant?

Basically, I plan to put out more remarkable music; more smash hits my Naija fans would relatively love. I hope to achieve more greatness with this because frankly, that’s the only way I can stay relevant artiste.

From the look of things, you have successfully built your brand in such a way that the name Skales has remained very constant on the social space, how has it been?

It’s been a challenging journey, to be honest… there are bittersweet experiences; both negative and positive but at the end of the day, the fact that my fans pay attention and always have something to say about me in the social space is somewhat gratifying – it keeps me motivated.

You have also been quite silent but some people think it is down to your rebranding and your decision to focus more on music; what have you been up to lately?

I won’t say I’ve been quiet because I’ve actually been putting out new materials and presently, my single, ‘Temper’ is doing considerably well out there. I’m also working on my sophomore studio album, which is going to be bigger than anything the Nigerian music industry has ever seen or heard! I’ve put in a lot to ensure it’s not your average album; I’ve been working on it for over a year now, hence I believe it’s going to be mind-blowing; best believe! I’m also going on tour during the summer in the USA and Canada.

Music has paid off for you in a big way but would you say this momentum could be sustained for another 10 years, given the fact that most artistes these days don’t last a decade musically?

The good thing about music and I is that it’s more than just profit-making for me. I am really passionate about my craft – I don’t see myself quitting or retiring from what I love doing the most; music.

A lot is expected from you this year because of the way you ruled the airwaves in 2015 and a substantial part of 2016, what are your expectations of  the year?

I am quite confident I own this year because I am about to drop some bangers and one of the best albums in the country and Africa at large.

How would you rate your success in the industry now and do you really think you have pushed yourself enough?

Most definitely! In terms of success I have come a long way; from traveling around the world touring, to having very busy schedule; making money and signing huge endorsement deals with MTN. But truthfully, that’s only the tip of the iceberg because I’m just getting started!

It has been argued that when one reaches a certain level in the industry, it becomes practically impossible to release hit songs. Has this truly affected you?

First of all I will like to say that statement is really not true because only artiste that get too comfortable with what they have achieved so far end up being inconsistent and non-productive. But as long as you push yourself further and not be overly complacent your craft you will always remain relevant, hence making hits effortlessly.

You released a new song which featured Burna Boy and it has been banging everywhere. What’s the story behind the song?

Truth be told; the story behind the ‘Temper’ remix is quite an interesting one. I sent Burna the instrumental to record a verse and he changed the whole song. Also, the chemistry between him and I was instantaneous and strong; hence the success. We also had a direction for the song; as we intended it to be a street anthem which will resonate with everyone out there

Are we expecting an album from Skales this year?

Absolutely! My album is complete – presently, we are just adding finishing touches to it. So, to answer your question; yes an album is on the way and it promises to be classic!

Maybe an international collaboration is also on the cards? Or you don’t fancy such fad?

Wizkid Superfan Tattoos His Name on Her Chest—See the Video!