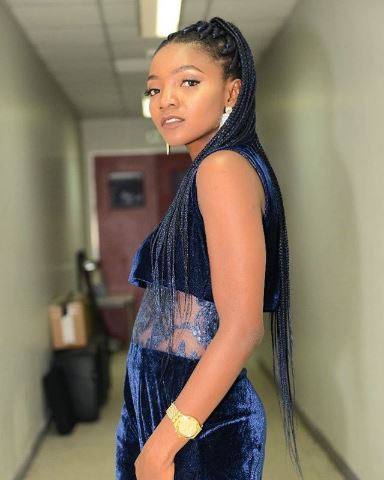 An Instagram user and unidentified ideator tried to enlighten Simi and in a sort of way broaden her exposure to the realities of the society regarding the comments she made about internet fraudsters some days ago.

The user who seems a very learned personality poured out the whole of his mind, heart and intellect on that very topic as he believed the statement from Simi which sparked an outrage amongst a lot of people in the society was totally out place.

He posits that having Simi condemn totally the actions of these guys without allowing theirs reasons excusable is really unfair and unreasonable. He feels Simi has never experienced the vindictive and callousness of life itself.

He gave quite a few illustrations to make Simi see why it is not in the wish of some of these people to indulge in internet scam, but the circumstances of abject poverty, hopelessness, death, frustration& aggression as well as a lot more for continues to facilitate their unavoidable decisions of embracing such despicable and highly condemnable way of life.

He however also writes that he does not aid the internet scam as he totally condemns it, but the people involved in it should not be castigated and mouth-killed without deeper reasoning of the difficult conditions they are faced with. 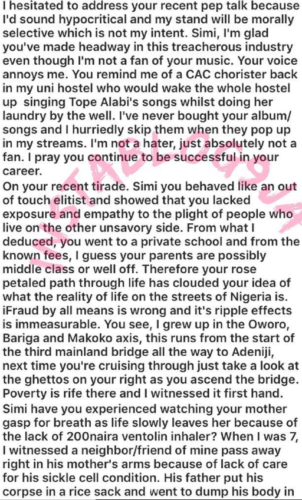 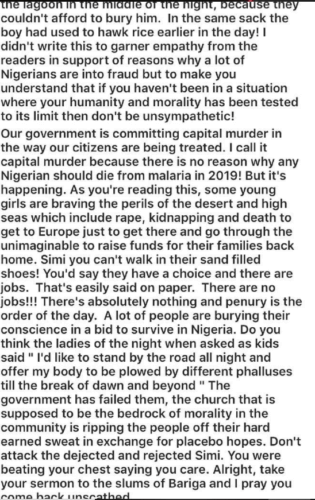