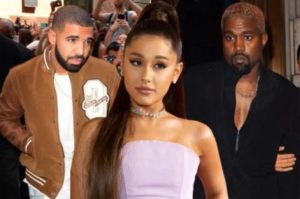 Tensions stormed social media on Saturday morning as Kanye West once again went on another twitter rant, this time calling out pop-singer Ariana Grande for using his beef with Drake as a promotional tool to market her new song “Imagine.”

“I know Ariana said this to be cool and didn’t mean no harm but I don’t like even slightest level of slight commentary from someone I know loves and respects me,” Kanye said earlier this morning.

“you know I got love for you but until you’re ready to really make sure everyone’s ok don’t use me or this moment to promote a song.”

Kanye’s response was to Ariana Grande’s tweet on thursday night asking the “grown men arguing” to “please behave” while she readied her single “Imagine.”

Well following Kanye’s comments Saturday morning, Ariana has since apologized for her tweet, saying it was a joke that she now knows was probably insensitive Keyword: probably.

“With all due respect, i don’t need to use anyone to promote anything. period,” she tweeted back. “i was making a comment ab what men were doing at the time vs. women.

it was a joke which i understand now was probably insensitive,” Ariana responded with.