Blackface Reveals Who & What Caused The Breakup Of Plantashun Boiz

Previous: “I’m Sorry But I’m The Best Producer In The World” – Kiddominant On SoundCity Awards Rant 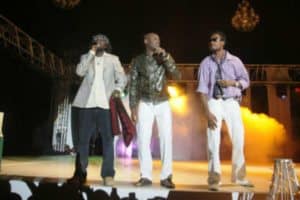 Controversial former member of the defunct Plantashun Boiz that comprised of himself, 2face and Faze, Blackface had an encounter with Sunday Scoop during which he mentioned some of the factors that led to the demise of the group. He said;

“Artistes are like footballers. If there is no love in a team, they cannot play together. Once you are in a group, you must consider the interest of everyone in it. But at some point, one of us was only interested in what he wanted for himself. He was responsible for the end of Plantashun Boiz because he was selfish.”

That “one of us” Blackface referred to, has been assumed to be 2baba knowing how vocal Blackface has been about his “betrayal”. Blackface also maintained that they could not work together as a group again.

“I don’t see us doing things together anymore and I have no regrets as life is a learning process. If you hear that we are coming back, it is just propaganda,” he said.

While admitting that being in a group brings quick success, he said it could also be very stressful. He added;

“As a solo artiste, you make decisions for yourself. You do what suits you and you don’t have to worry about other group members. Though doing music with a group of people is okay, being a solo artiste is better. That way, you can control your music.”