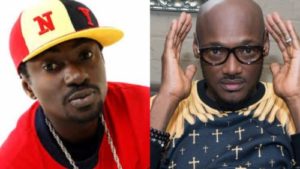 Just when we thought the issue between two former Plantashun Boiz members, 2face and Blackface has been buried, the former has now come out to reignite the feud by declaring a serious war on 2baba.

You would recall there were times in the past when Blackface laid claims to the fact that he wrote 2face Idibia’s 2005 mega love hit; “African Queen,” with the legendary singer going ahead to release the song without giving credit to him and also ‘calling him out’ for his alleged action as well as issuing legal threats.

It was even believed that the last time Blackface expressed his rage over 2face and his alleged plagiarist actions, the two former music group members met and had a gentleman’s agreement which finally buried the whole feud.

However, it now seems shocking that Blackface has yet again come out for the ‘one millionth’ time to call out his former partner. He took to his Instagram page to declare war on 2face, saying the legendary musician will be over with 2019.

2face is yet to give a response, we will surely keep you posted as more events unfold.

“Blackface Vows To End 2Baba’s Career As He Declares Total War On The Legendary Singer”, 5 out of 5 based on 1 ratings.