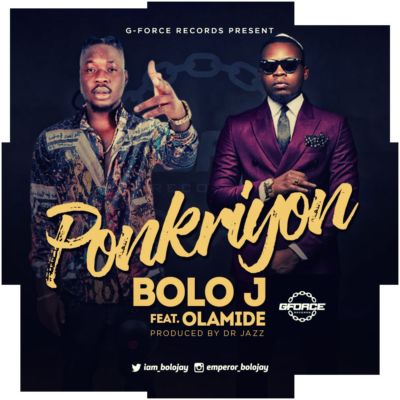 Few days back your Timeline was flooded with updates and Videos of Collaborations between GForceRecords Artiste BOLO J and YBNL BOSS OLAMIDE(Baddo) on this new one titled PONKIRIYON.
Bolo J (Blackson), as he is popularly called is on to the next one with his musical career with this new joint. Earlier this year, he dropped a song titled “WONT YOUR LOVE” that featured on it South African musical group UHURU and also released visuals to his single LOOKING FRESH; Directed by GodFather Production.
Bolo J can be said to have taken a giant stride with this new single. PONKIRIYON was Produced by Dr Jazz.
Listen. Download and Share.
Bolo J x Olamide – “Ponkriyon” (Prod. By Dr Jazz)