Cardi B Reportedly Back With Estranged Husband, Offset 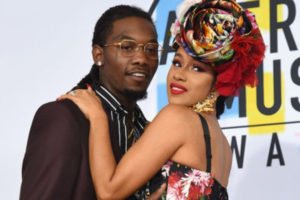 Cardi B is reportedly back together with her estranged husband; Offset, following their split at the end of last year.

The female rapper called time on her marriage with Offset amid claims he cheated on her after a number of leaked text messages surfaced online.

Cardi is said to have returned to the Atlanta home that the couple shared before their split, marking the first time she’s been back there since December.