Carterson – “In The Air” ft. Jumar 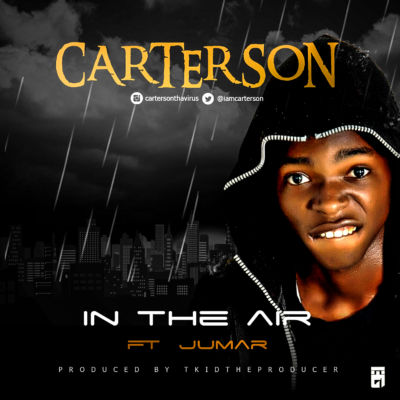 Nigerian uprising hip-hop prodigy, Carterson aka tha Virus smashes into 2016 with the amazing new single titled “In The Air” following the release of his critically acclaimed mixtape, ‘I Am Legend‘ in December 2015.

“In The Air“ is a classic new school hip-hop cut and another impressive selection from Carterson’s music catalogue peppered with witty bars from the MC, and underpinned by an irresistible hook – In The Air shows further confirmation that Carterson is one of the artistes to watch in 2016.

The song which serves as a teaser of what we should expect from the rapper this year, features gifted sensational singer, Jumar who appeared on ‘The Search‘ off Jesse Jagz‘ The Royal Niger Company album. Produced by fast-rising South African super-talented beatsmith, T-KID The Producer, mixed & mastered by Shadybizniz and Mr Moore.

Enjoy and expect more from the Beast Of The South in few weeks.

Carterson – “In The Air” ft. Jumar