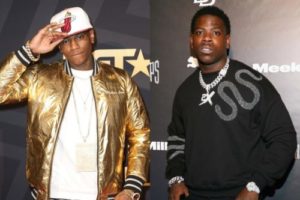 Earlier in the weekend, a video surfaced of a feud which took place between recently raving Soulja Boy and Casanova when the former confronted Soulja Boy over the way he addressed a certain woman in question.

Cas said, “You screamed at a lady, you bugging the fuck out, homie,” Casanova could be heard saying to Soulja Boy. “You got shit all over your face. Are you bugging out? You high? You smacked? You don’t see how she ran out?”

Soulja however quickly got cover for his action. He responded “If they females, they need to talk like females,” he said. “Why she talkin’ like she gangster?”

Well, the two rappers got on the phone during Soulja Boy’s session of Instagram Live to amend the broken sides, eventually laughing with one another, and quickly moving past the minor altercation.

“I’m good. I don’t want no problems with nobody,” Casanova said. He went on to warn YoungDrako against allowing his inner circle to egg him on in the process of making bad decisions. “N*ggas around me used to amp me up,” he said. “Don’t let nobody gas you… Rappers is dying out here, homie, off of little shit like this. I ain’t letting no blog trick me out of my shit.”

Casanova confronted Soulja after he was seen yelling at a woman ???? [via: @leveluphiphop_ ]