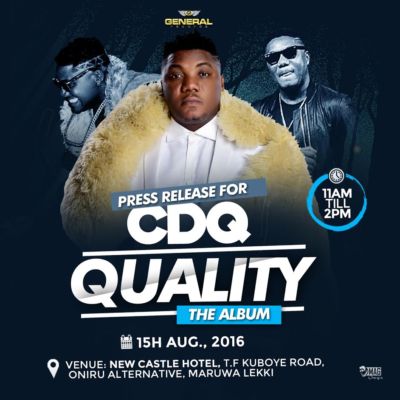 Rapper, CDQ is definitely not one to miss out on the rain of albums in 2016.

With his album debut already titled “Quality”, CDQ is giving an open invitation for a press release meeting in anticipation of the launch, which is only a few days away.

Part of the activities planned for the briefing, is an interactive session with the artist, CDQ and the producer, Masterkraft on expectations from the ‘Quality’ album. Going by his recent releases, CDQ has successfully profiled himself to becoming a most sought after artiste with singles reaching a high status in commercial acclaim, as well as features with other artistes the caliber of Wizkid, Olamide and Skales.

Definitely, the ‘Quality’ album is one to look out for.