Channel O And MAVIN Records Are giving “YOU” The Chance To Be IN The DOROBUCCI Music Video! 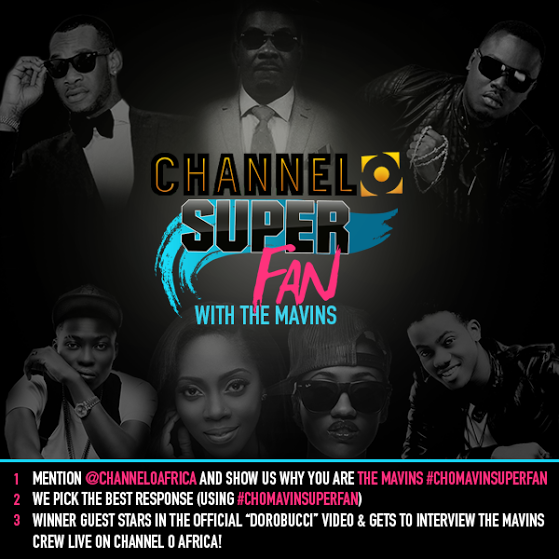 In keeping with its SWAG theme (Something We Africans Got), Channel O is rolling out a year of great surprises, and this exciting new competition which will be run over social media platforms, is just the latest!

In addition to starring alongside some of Nigeria’s biggest stars, the one lucky SUPERFAN will get to hang out with the artistes who’ll answer their questions about life in music’s fast lane. You’ll be backstage and in front of the cameras, so if you have ever wanted to know what it takes to make the phenomenal music videos you see on television, then wonder no more!

The competition is simple to enter. First make you sure are following @channeloafrica and @donjazzy on both Twitter and Instagram. Then use these platforms to tell us why YOU are the ULTIMATE MAVIN fan! Remember you must use the hashtag: #CHOMavinSuperfan on all your messages. The competition runs from 28th Don Jazzy will reveal who he’s chosen as the CHANNEL O MAVIN SUPERFAN! Details of the music video will be announced later this year, so for now, just make sure you are part the competition!

Commenting on the competition, Channel O Africa’s Lee Kasumba says, “Channel O’s audience are incredibly loyal supporters of the channel and its line-up, so anytime we can offer them an amazing opportunity to engage up close and personal with the stars that are lighting up the airwaves, then we want to be able to do that. We are delighted to be partnering with the wonderful team at Mavin Records to make one SuperFan very, very happy!”

Meanwhile the legendary Don Jazzy, who heads up Mavin Records, is equally pleased with the partnership. “Channel O have enthusiastically supported African music for over 15 years, and are always willing to engage with the industry and the fans. So to work alongside them to create a memorable experience for one SuperFan is something we were happy to do. Of course, at Mavin Records, we are expecting to make the DoroBucci video one of our best ever so it’s gonna be something very special to be a part of!”

Channel O is available to over 50 countries on the African continent on DStv (channel 320) and on GOtv (in selected markets). For more information on Africa’s first ever dedicated music channel, home of the annual Channel O Music Video Awards, visit www.channelo.com. Highlights on the channel this month include the new music video for the epic Africa Rising anthem featuring Tiwa Savage, Sarkodie, Davido, Micasa, Diamond Lola Rae & Diamond, plus a behind the scenes look at the making of the video!