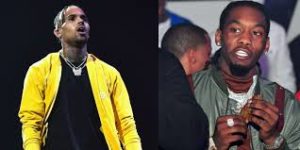 Offset has already sounded it clearly that he does not find any of the memes attached to 21 Savage’s case with the ICE funny at all. And that was why he responded to Chris Brown’s post about 21 Savage, clearly showing his displeasure. The rapper gave a four word response to Breezy’s post, calling it “lame.”

Chris Brown didn’t take Offset’s four-word sentence with levity. In response to being called lame, Breezy issued a lengthy response to the Atlanta based Migos rapper and offered to squabble up.

“Fuck you lil boy. Better worry about what u got going and focus on ‘you,'” Brown wrote. “All this cap on IG is what’s lame. Yo energy wont that when I came to Drake show in LA. If you don’t get yo a hip a hop a hibbet a hibbet to the hip hip hop and ya don’t stop the rockin facea** out of my comments. Sensitive a** n**ga. Call me personally. U want some clout when all u gotta do is pull up. No camera, no flexing and all at!!! If you a real man fight me. Oh and another thing, suck my dick!”

Breezy wasn’t done. The singer then took a screenshot of his comment and posted it to his Instagram story, writing a caption. “If he don’t get his EARTH WIND AND FIRE pootytang space suits WEARING CAP ASS LIL BOY da fuck out my comments and off my dick.”

It didn’t take too long for Offset to respond. The rapper also took to his Instagram story, writing, “coke head don’t want no [smoke].”