Coke Studio Takes May D, Tekno, Selebobo, Others to CRUTECH 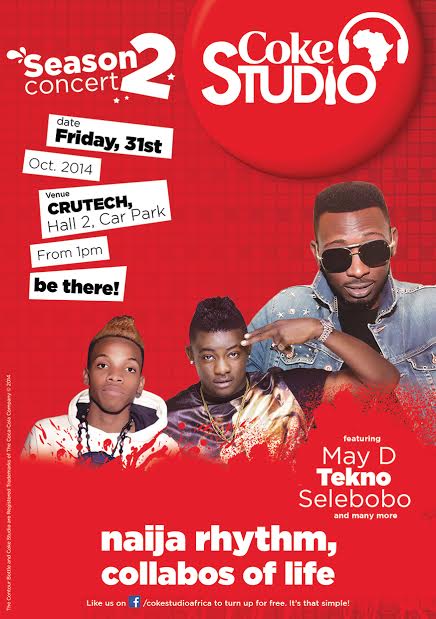 Lovers of good music and dance are in for a time of their lives as the Coke Studio Concert hits the campus community of Cross River University of Technology (CRUTECH) on Friday, October 31st with performances from May D, Tekno, Solebobo amongst others.

CRUTECH will mark the seventh campus visited by Coke Studio Concerts since it kicked off in September after touring the Lagos State Polytechnic, University of Benin, Abia State University, University of Lagos, Obafemi Awolowo University and the University of Port-Harcourt campuses with some of Nigeria’s biggest music artistes.

The Brand Manager, Colas, Coca-Cola Nigeria, Olufemi Ashipa, explains that the concerts were inspired by the need to take the experience of the Coke Studio TV broadcast directly to the target audience. “Through these concerts, we are giving our consumers the opportunity to enjoy the music experience Coke Studio brings”, Ashipa said.

He also noted that selection of the artistes was based on the preferences of the consumers in each location. “These artistes are big among our target consumers and also the Nigerian music scene. The big idea with these concerts is that not only do they get to watch the artistes perform; their local acts get to perform alongside these established acts”, Ashipa said.

Ashipa added that interested members of the campus community, who would like a chance to perform live on stage with the music stars, can do so during the concert by buying a bottle of Coke, liking Coca-Cola on Facebook and coming out to enjoy good music.

Coca-Cola through its unique music platform, Coke Studio, is bringing to Africa a unique blend of music through fusion of genres, songs and styles of popular music acts across the continent. This year, its second season has turned out bigger, bolder, and better bringing together over 20 African artists from Nigeria, Kenya, Uganda, Tanzania and Mozambique create a modern and authentic African sound through intercultural musical fusion.

VIDEO: Femi Kuti On The Truth With Olisa

May D brings this freestyle song titled "Dodo" and backs it up with a dance video for your pleasure... Enjoy!...