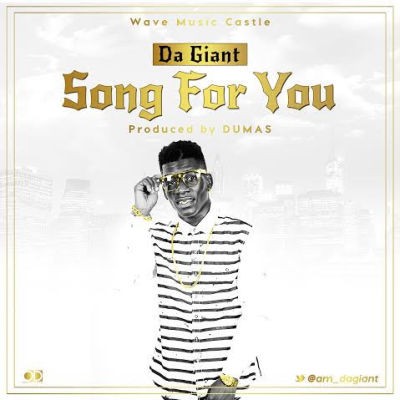 Da Giant stormed the industry with the release of his astonishing cover of D’Banj’s ‘The King Is Here’single a couple of months ago. Gathering momentum with ‘The King’ as he titled his own version, Da Giant is back with another stimulating love song entitled, “Song For You.”

Da Giant is a Nigerian Afro hip-hop artiste signed to Wave Music Castle (W.M.C) – a record label based in Turkey; Da Giant is also an ambassador of Mute Gang Garments in Turkey.

“Song For You” is a soulful and affectionate song, fashioned on masterclass instrumentals, highly creative cords, astonishing trumpets with indigenous and foreign drums that showcased the eminence of fast rising music producer, Dumas.

Speaking on “Song For You”, Da Giant explained he wants the industry to have a new feel of him by delivering a song that is less done by Nigerian artistes –Soulful songs. “Nigerian artistes don’t pay attention to songs like this, it became necessary for me to meet up with the expectations of fans craving for love songs,” he stipulated.

With the passion and emotions Da Giant applies to making his songs, it’s obvious that Da Giant is not just an artiste but, an artiste who focuses on what music listeners and lovers desire. “Song For You” showcasesDa Giant’s exceptional talent, well nurtured vocals and creative lyrics.

Listen to “Song For You,” sing along to the rhythm, gulp the lyrics and ENJOY!