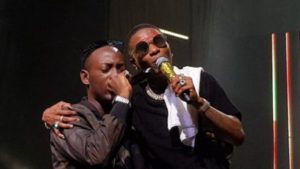 It was indeed an emotional night for Dammy Krane yesterday as he performed at the Wizkid VIP Experience concert at the Eko Conventional Centre in Lagos last night.

It was previously rumoured that since the two had a face-off in a lagos night club some years back, they haven’t been on talking terms.

However, many were suprised to see Dammy Krane perform at Wizkid’s recent concert in Abuja after having believed the rumours spread around.

Meanwhile, Wizkid had another concert in Lagos yesterday and again he brought Dammy Krane on stage to perform. But this time it was such an emotional moment for Dammy as he cried in Wizkid’s arms to perform his hit single; “Amin.”