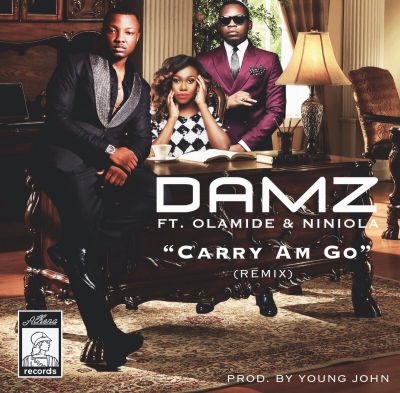 Known by his artistic name Damz, Athena Records frontline act “Damilare Odueso” who released his debut single Awelewa sometime last year (2014) is taking no chill as he enlists YBNL General ‘Olamide’ alongside the Ibadi and Soke crooner “Niniola” for the remix of his previously released DavStyle produced single entitled ”Carry Am Go”.
Unlike the regular, Damz decides to bring a different feel to the Remix of Carry Am Go by joining forces with Nigerian prolific “wicked” music producer Young John and they both came out with an extraordinarily good sound.

With Olamide delivering like he has never done before, Niniola blessing the joint with her angelic voice coupled with a well laced verse and Damz doing what he knows best i.e; stepping up with every release, the Remix of Carry Am Go is no doubt that song you’d happily add to your playlist without ignoring the repeat button.

And is most likely going to be Naija’s version of a summer hit.