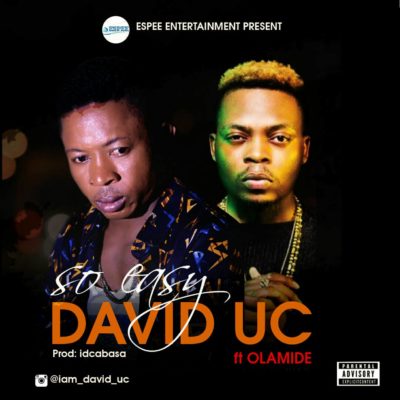 Azomokwu Ucheka David popularly know as David UC, hails from Agbor IKA North East, Delta state Nigeria, The Espee Entertainment executive member is an artist, songwriter also a member of Actors guild of Nigeria (A.G.N) producer of the movie titled “Virgin for hire“, he has worked with some couple of stars like Mr John Okafor Alias Mr ibu in the movie titled DORROBUCHI LOVE and so many more,
He hereby dishes out his new single “So Easy” featuring one of Nigeria’s top notch act Olamide Baddo to his fans home & abroad song produced by legendary ID Cabasa.
No doubt he’s about to make a rave of the moment, Without much explanation it’s definitely a song you should watch out for as we await the visuals to it.
David Uc is certainly an act to watch out for this year.