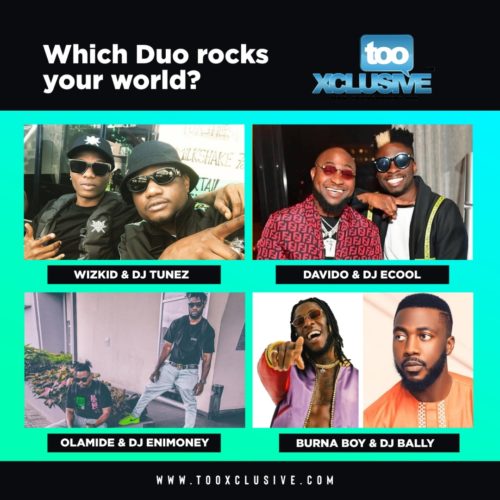 This duo became a popular team in 2016 when Davido spent over 8 months in the United States. The two started working together in that same year as they both returned to Nigeria. Every of Davido’s concert has always seen Ecool play as the main Disc-Jockey. In fact sometimes, to show the great chemistry between their two, Ecool doubles as Davido’s DJ and hypeman at major events both in the continent and outside the continent. Both guys have also been on songs together, most notable is Ecool’s debut single and 2018 hit single, “Ada,” the other one is “4 U” which features the OBO & Peruzzi.

These two met in 2015 and just clicked immediately. Due to DJ Tunez’ magic fingers and mastery at his craft, Wizkid made him his official Disc-Jockey and ever since, it’s been a really adventurous journey for both of them. DJ Tunes is always a presence at all Wizkid’s major concerts, they go on tour of the world together and never look back. Just like Ecool, DJ Tunez doubles as Wizkid’s DJ & hypeman and it’s always been a moment to ever want to behold. DJ Tunez and Wizkid have two songs together, however “Gbese” is their latest and it was released some months back, good record!

This is the only duo in the list that have family ties, both guys are related by blood and have been together almost since the start of their lives. Olamide is DJ Enimoney’s elder brother and like an elder brother would want to care so much for his younger one, Baddo has been carrying Enimoney along ever since he became a household name in the Nigerian music industry. DJ Enimoney is Olamide’s official DJ and he is signed to YBNL as well. He plays at every concert Olamide performs at, whether it’s his concert or he was invited as a guest artiste, Enimoney would be the person on the “wheel of steel” holding it down for Baddo. Enimoney has featured Olamide on a couple of records, latest of which is “Shibinshi” which has Reminisce on… as well.

Definitely the most unpopular duo of this list. Burna Boy demanded DJ Bally’s services after the latter’s participation at the Big Brother Naija Season 2 reality TV show in 2017. DJ Bally remains the official DJ of Burna Boy, however, both have been rarely seen working together in recent time and that has raised questions about the existence of their working relationship.