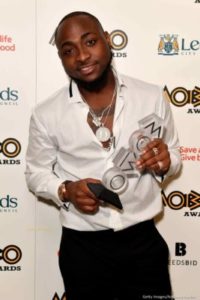 The singer bagged an award in the most competitive category for the ‘Best African Act’. Although, Davido already stole the show with the performance of his 2017 hit single ‘IF’, the biggest highlight of the night was when the DMW boss came on stage to receive his award.

The singer used his acceptance speech as a medium to sensitize the crowd about the ongoing brutality and slave trade in Libya which has affected citizens of the West-African countries.

Davido went further to dedicate the award to his two little daughters, Imade and Hailey Adeleke.

Watch this video below.