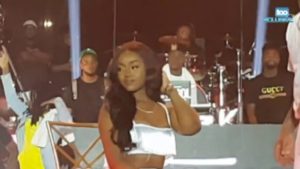 Davido performing “Assurance” with Chioma on stage at his concert in Lagos last night was truly a sight to behold for the lovers.

The singer brought out his beloved, serenading her with love as she was seated on stage.

“Davido Performs “Assurance” In A Unique Style With Chioma At The “City Of Davido” Concert || Watch”, 5 out of 5 based on 1 ratings.