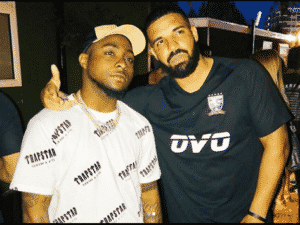 So Davido decided to keep one of the juiciest gists from his participation in the Wireless Festival from us. The singer was at the International music concert which held between July 6-8, 2018 in the UK and he met with International artist, Drake during the event.

The two artists posed for a picture that somehow managed to surface on the internet. Considering the fact that the International music community is increasingly receptive to Nigerian music exports, it is not surprising that Drake met with one of the biggest pop stars on the African continent, however, it is a bit of a surprise that Davido did not share the picture with the public like some of his colleagues who have met with Drake in the past have done.

“Davido Poses For Picture With Drake At Wireless Festival [SEE PHOTOS]”, 5 out of 5 based on 1 ratings.