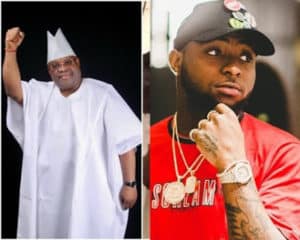 The existing bond in the Adeleke family is something to discuss. The rich family from Osun state is composed of several public figures including Davido, his cousins, B-Red and Sina Rambo; and their father, Senator Adeleke aka the dancing Senator.

Senator Adeleke recently won the election to represent his party as the flag bearer in the forthcoming gubernatorial election in the state. Davido joined his victorious uncle in celebrating the win; and the bond they share was evident in the way they greeted.

Singer, Chidinma might be expecting a child. This is according to an online report that remains unconfirmed. The singer shared a picture in which she appears to have a protruding belly. This has led to the speculation that she is pregnant.

Mavin Records act, Korede Bello‘s Do Like That video has reached 70 million YouTube views. The song which is a blend of pop and contemporary R&B, was released in 2016. International singer, Kelly Rowland featured on the remix of the song. Korede Bello took to Instagram to celebrate the success, which is coming at a time when the singer is being mocked for not having a hit single since 2015’s Godwin.