Who knew Davido was savage? Well if you were ever in doubt, the singer has cleared the doubt with his recent act of spending $1000 to troll a non-fan on Instagram.

A certain @hopewellc took to Instagram to narrate how Davido failed to command attention when he stepped into Zimbabwe’s Pomona Nando. He made this post perhaps with no intention to poke the singer but Davido is not a man to allow people smear him. In reaction to the post by @hopewellc, Davido initiated a ‘best caption wins’ challenge using a picture of @hopewellc, with a promise of $1000 for the winner.

After several entries, Davido found his winner in @Princepaul whose preferred caption for the picture is ‘Begger.’ This caption was satisfactory to Davido who clearly enjoyed trolling @hopewellc even at a cost of a $1000. 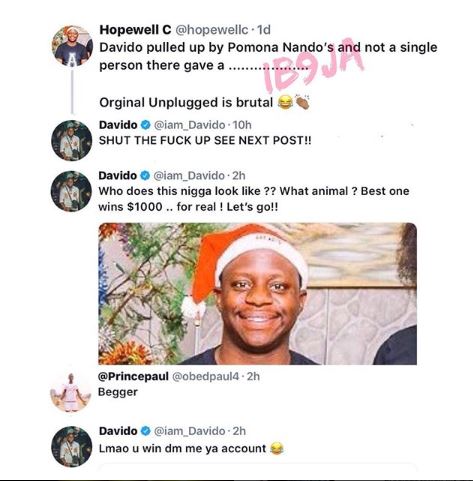