Davido’s Girlfriend, Chioma In Family Trouble For Dropping Out Of School 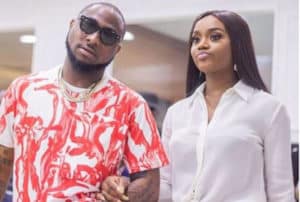 Davido‘s girlfriend, Chioma is reportedly in trouble with her family over her decision to skip school. Her family, particularly her father is said to be angered by her decision to pick her celebrity love life over her education.

Chioma and Davido have formed a graceful pair and the media has been following the developments in their relationship. The love story became a major topic when Davido bought her a Porsche on her birthday. The singer also dedicated a song titled “Assurance” to their love.

The two have been hinting at taking their love to the next level which seems to be marriage. The singer recently proposed to her and the beautiful Chef accepted his proposal. However, Chioma’s family seem not to be in support of the development. According to a reliable source,“Chioma’s father, who is a devout Seventh Day Adventist is not particularly pleased that his daughter has not been serious with her studies. Vanguard Ripples’ has it on good authority that the love struck girl who gained admission into Babcock University (a Seventh Day Adventist school) to read economics in 2012 is yet to graduate, when she should have completed the course since 2016. Chioma, once skipped a whole session because she was traveling around with Davido and had to defer her studies.

It was further gathered that Chioma’s father had a strict talk with her about her decision to pursue marriage over school but it appears that her mind is made up. Chioma and Davido have continued to live like they are married.