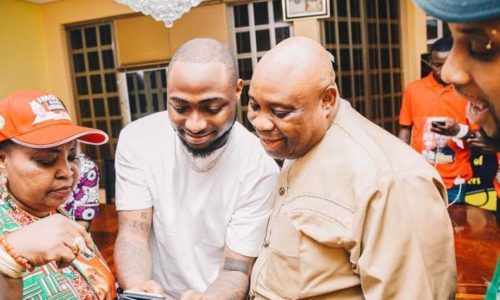 Davido’s Uncle, senator Ademola Adeleke has been arrested by officers of the Nigerian Police force.

The senator was on the 6th of May, 2019 arrested and put in custody for allegedly being a part to a criminal activity. The Nigerian police force spokes person Frank Mba revealed yesterday.

He said; “Senator Adeleke is currently in police custody. He was taken into custody in the evening of today 6th May 2019 in connection with ongoing criminal investigations touching on his person

“Meanwhile, in the best tradition of natural justice and fair hearing, he has already been served with the relevant charge sheet containing his alleged offences in the presence of his Attorneys.

“He will be arraigned in a competent court of law tomorrow, 7th May 2019.”

Although the Nigerian police force haven’t declared exactly the reason he was arrested, the senator’s campaign organisation team reveals he was arrested in connection with the O’level certificate forgery saga.