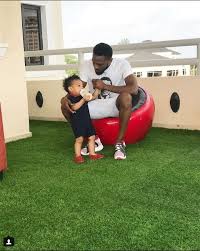 D’Banj has lost his son, Daniel.

Daniel was said to have drowned in the pool at the singer’s Ikoyi residence.

According to multiple reports, Daniel Oyebanjo III, the son of D’Banj and his wife Lineo Didi Kilgrow, today (Sunday, June 24th, 2018), lost his life in an unfortunate incident. The 1-year old boy who turned one last May, is said to have died after drowning at D’Banj’s Ikoyi residence. His remains has been moved to a morgue at GRA, Ikeja. Colleagues and fans of the singer have been expressing their condolences. The singer himself has made a post on social media about the sad incident.

Dbanj’s 1-yr-old son drowns . . In a very sad turn of events, singer Dbanj and his wife Lineo Didi Kilgrow, today, lost their son, Daniel. . . Daniel Oyebanjo III who turned one last May, is said to have died after drowning at Dbanj’s ikoyi residence this afternoon. His remains has been moved to a morgue at GRA, Ikeja. . . We got the information around 6pm today but had to hold on to it till we get confirmation from the dad who is currently in the U.S. He has just reacted to the news. Our thoughts are with him.