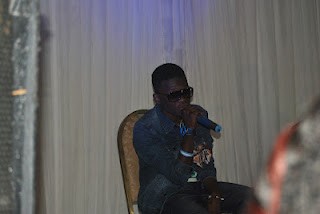 “Dice Ailes” christened Shasha Damilola Alesh is an 18 year-old Nigerian-Ghanaian young lad who released his first songs at the age of 15 on Rhythm 93.7 (Lagos, Nigeria). “Feeling d way”, one of Dice’s newly recorded tracks is already earning him some airplay on radio stations such as G987 (Toronto). This versatile phenom and student at York University is currently working on his yet-to-be-titled album under the stable of Toronto-based and newly formed Tee Tash Records. At the same time, he has been performing across Canada alongside some notable African and North American acts, including Maestro Fresh Wes, Bracket, Dan-e-o, Skales and Wizkid

Wizkid And Skales In Toronto

NEW SINGLE FROM THE BACK-TO-BACK ARTISTE, DICE MANAGED BY LOOPY MANAGEMENT WHO WAS RECENTLY FEATURED ON 'AYO' BY TOPHAA, HAS...

Wizkid And Skales In Toronto