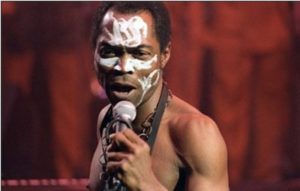 US music icon, Diddy and rapper, Joe Budden decided to start their new year with the legendary Fela Kuti‘s music. The two international music acts were captured in an online video, grooving to Fela Kuti’s music as they looked to be in a celebratory mood.

This is not the first instance where Diddy would publicly show his love for Fela’s music. TX news had earlier reported that the globally acclaimed business man danced to Fela’s music sometime in 2017. Joe Budden has also expressed his appreciation for Nigerian music when he acknowledged Wizkid as a prime influencer of the American music culture, during one of the episodes of Everyday Struggle, a popular talk show he used to host. The fact that Diddy and Joe Budden grooved to Fela’s music confirms that African music has indeed found its way to the centre of the global music community.

Diddy and Joe Budden grooving to some Fela Kuti. pic.twitter.com/PABdemLn60