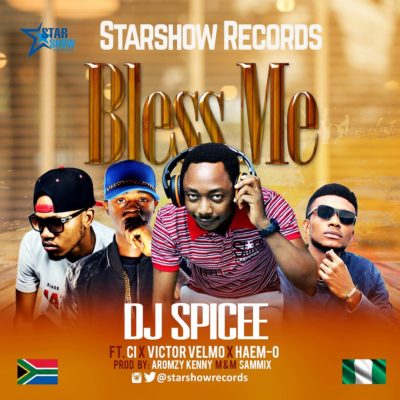 The new jam, titled “BLESS ME” is an excellently collaborated international act.

The song cuts across cultures and appraises the Beauty of Africa and the African Woman.

The Song is nothing less than what it is. One would say it slaughter’s the imagination of music minds from the theater House.

The Afro Pop sound is refined, explicitly conjured with Rhythms that connects to the soul.

The lyrics is well articulated, it transcends to the sub-consciousness and makes u want to sing aloud and move in ecstasy, the excitement is unending.

The brain box behind the song, DJ Spicee, CEO STARSHOW RECORDS, seeks the craft of the indigenous rapper and on air personality VICTOR VELMO, Mr. C.I, and HAEM-O from SOUTH AFRICA..

YOU KNOW ME? DJ SPICEE “LET THE MUSIC TAKE OVER”

Victor Velmo – Love Me Up