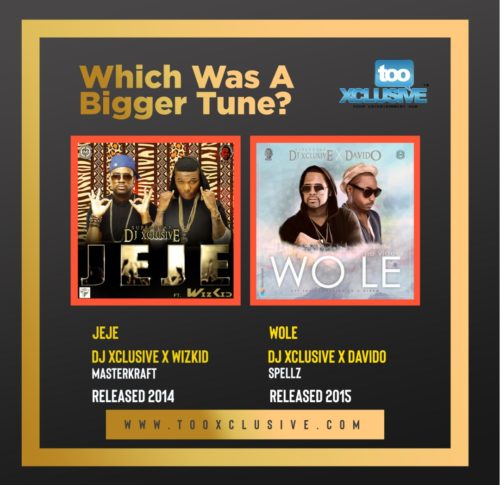 It’s time yet again for our “Throwback Versus,” the face-off will be between two great DJ Xclusive records which feature two of the biggest music acts (Davido & Wizkid) in Africa.

In 2014, DJ Xclusive  featured Wizkid on a banging record, “Jeje” which was smoothly produced by Masterkraft and well performed by Starboy. “Jeje” after its release became an immediate banger and especially a dance propellant at all social clubs in the country. Wizkid has three verses on the song which is well sung. He expressed his vocal ability and made sure the song lacked no melody. It was a great party jam.

On the other hand, Davido was featured by DJ Xclusive a year after “Jeje” was released. The DJ and Davido created another banging record titled; “Wole” in 2015 and it became an instant banger too, spreading across all clubs quickly and being the life of the party at major social events. Davido took two verses on the Spellz produced jam and it was lit. Xclusive and Davido both scored a hit with this one!

Looking at these two songs, they are both great jams which made our 2014 and 2015 great musically, however, for healthy comparisons’ sake, we would like to know which you feel is a better jam.