DMX Blasts R.Kelly After Catching Him With A Minor 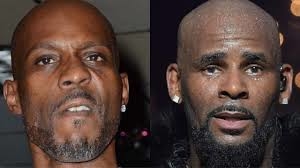 R.Kelly’s infamous reputation for his alleged sexual misconduct is being considered a known fact amongst music industry figures. DMX was part of the lot that was aware of the claims of his amoral acts and eventually became one of the few to call out the singer. In a 2009 interview with DJ WhooKid, DMX recalled feeling insulted by Kelly who decided to isolate himself in a separate room during their studio session.

He later explained his anger. According to his memory, Kelly had invited him to the studio being “pressed to do a song for a minute.” When the rapper showed up, Kelly was nowhere in sight. DMX still got cracking on a track, waiting no time.  The emcee only realized R. Kelly was in another room when the singer’s then-manager requested feedback from his client.

Reposted from @myreligionisrap – Throwback DMX interview from 2009 X explains how R. Kelly was hiding in the studio with a minor… #dmx #rkelly

“DMX Blasts R.Kelly After Catching Him With A Minor”, 5 out of 5 based on 1 ratings.