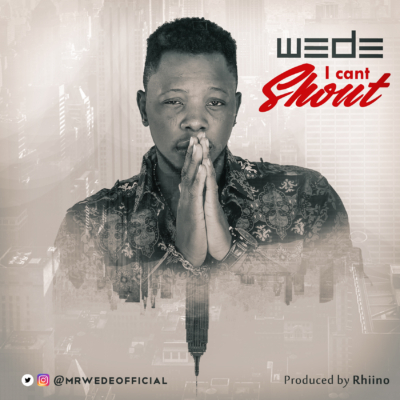 WEDE a new player in the musical scene in Nigeria but a potential music giant full name is Melvin Wede Owotoro, a native of Delta state.  His cling to Music started so many years ago with the likes of R. Kelly, 2baba, Usher Raymond and a host of them as his role models.

WEDE has featured in a lot of shows and events with his awesome stage performance and his soothing voice. Music has always been part of him from his days in Secondary School through to the University and now most of his moments. His genre of music is Afro-pop, Reggae and Ragga, he’s also a gifted instrumentalist as he pulls the guitar strings perfectly.

WEDE is a good music writer and has written over a 100 songs, he’s available to be signed and will be an asset should any top Major record label offer him a mouth watering deal.”WEDE” comes up with a brand new Single titled “I CANT SHOUT.” The dope jam was put together production wise by Rhiino, mixed and mastered by VC perez

The song “I can shout’ is a massive hit, i’d endear you to cop this jam, its a potential massive HIT..Follow @Mrwedeofficial on social media.

Cop it below and Enjoy!