Previous: Meek Mill Talks On 6ix9ine’s Imprisonment, Says He Is Not ‘Responsible’ 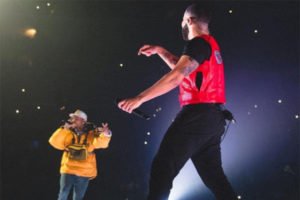 Drake and Chris Brown have had ‘cold war’ exist between them in the past years, they have not been in good terms at all for some time now.

They’ve had clashes in clubs, lounges and even at events which further aids their ‘enmity’ in the past. But during the Aubrey & The Three Migos tour, Drake brought Chris brown on stage for a performance which delighted the audience that was present and also giving a major sign that the long existed feud is all but squashed.

Drake even dubbed Chris “One of the most talented human beings on the planet.”

Chris Brown took to Instagram to reveal a gift he received from Drake. The rapper hooked up the singer with a beige OVO Letterman jacket. Brown vowed to return the favor to Drizzy with some Black Pyramid gear, captioning the photo, “@champagnepapithanks for lacing me I GOT THAT? @blackpyramidofficial FOR YA.”

The love between the two superstars is now rekindled. Great!