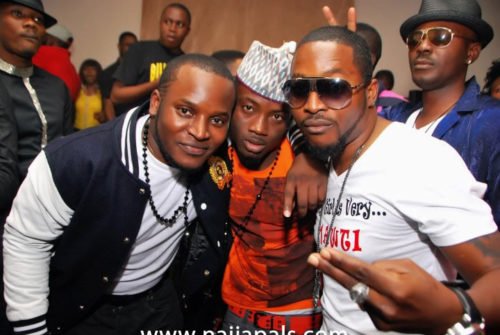 From the look of things, it seems there is every chance that a new beef would be hitting the industry very soon. But the interesting thing is, the beef won’t be between any of the current generation crop of artistes but the veterans.

Eldee and Olu Maintain could help contribute to one of the factors (beef) that makes a year a successful music one if they decide to have a go at each other’s throat as a result of Eldee’s recent internet outburst.

Eldee took to his instagram page to upload a video of Olu Maintain performing his 2009 hit single “Big Boy” on stage at an event in New York accompanying it with a fierce caption that vindictively slams the “Yahooze” crooner.

Eldee wrote, “This shameless nigga out on stages performing my songs like he created it. I still remember how he tried to steal the record after I put him on it, forcing me to put it out prematurely. Nigga ran off with the unmastered draft and went to print CDs with himself as the lead artist, even his verse was written by me #Appropriation #getyourownshit Lesson to young artist Don’t ever do pity features.”

However, soon after his outburst, Eldee took down his post about Olu Maintain on Instagram and apologised via his Instagram Story to his fans for allowing his anger overwhelm him.

“Last post was out of character. If you know me, you know that I don’t usually sweat shit like that. Sorry if I offended you but I have a lot of stories I never got to tell about the shady nonsense I kept quiet from in that industry. #NigerianAmericanPodcast #NewEpisodes #ComingSoon,” he wrote. 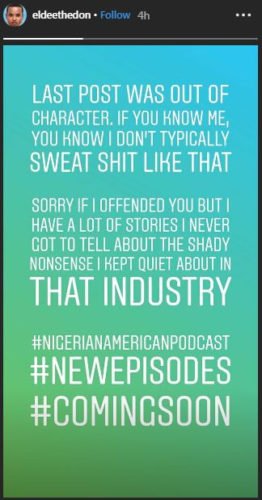 Olu Maintain is yet to reply Eldee though but fans are really anticipating his response and they are jeering themselves up for an entirely weirdly looking but interesting beef.

We hope this is settled amicably though.