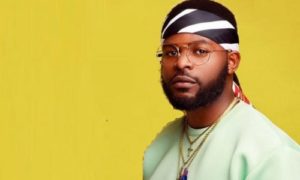 Falz has announced via his Instagram page that he is set to go on a world music tour.

He is set to go on tour which would kick off in Lagos and then continue in some cities in the United States Of America (USA). He shared the tour dates and the cities he would performing in on his Instagram page. The tour is to begin on the 10th of April,2019 and would end on the 11th of May, 2019.

He would be performing in Lagos, Mauritius, Los Angeles, San Francisco, Dallas, TBC, and Houston. 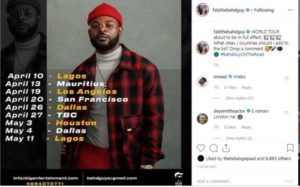 Falz had his first UK concert tour “Falz The Bahd Guy” last year Easter where he performed for the first time at the O2 Academy in Islington, London. The tour received a very positive reception as he performed hit singles and wowed guests with his comic prowess.

The rapper kicked off the year with his fourth album “Moral Instruction” which has hit tracks like “Talk“, “Hypocrite“ and “Johnny“